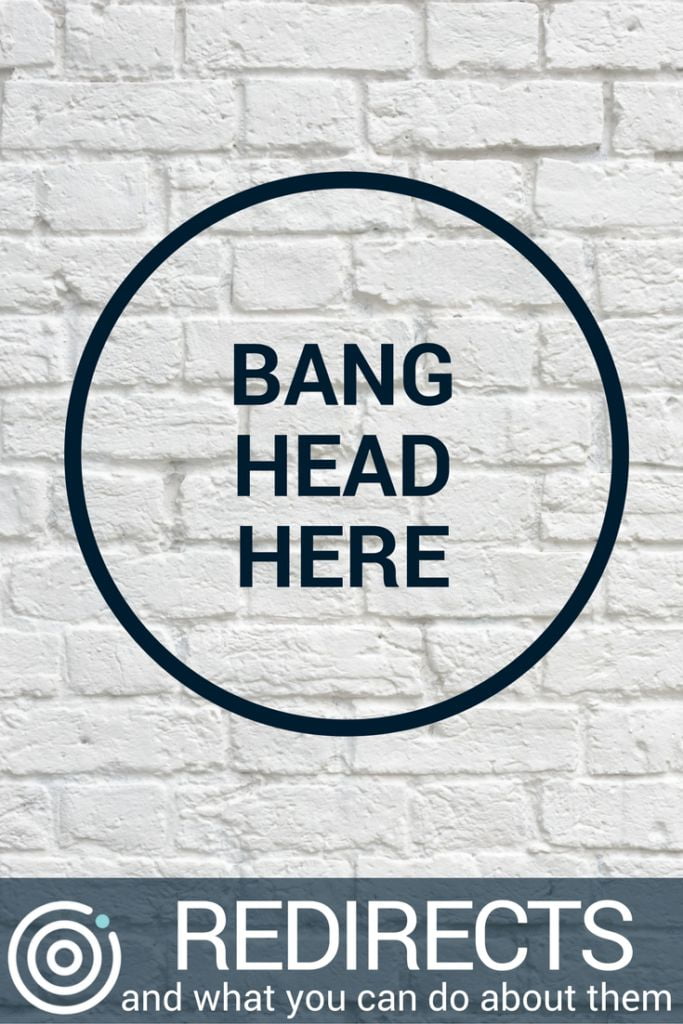 Let’s talk about one of the most annoying plagues of the online advertising industry: redirects.

There you are, browsing your favourite website (statistically, you’re watching cat videos—no judgement), and BAM—all of the sudden your browser minimizes and the App Store takes over and opens to the latest trendy puzzle game.

So who is responsible for this occurrence?

Is it the website owner placing code on their site? Is it the company running their ads? Is it an ad provider? Is it the owners of the latest trendy puzzle game?

The answer is a bit complicated, so let’s start from the top.

One of the main goals of publishers is to get as many people to their site as they can and to keep them as long as possible. Longer times on site contribute to higher levels of engagement with content, which only adds value to the website. Redirects can potentially cut time on site and in turn user engagement, and in some rare cases prevent visitors from coming back. So, obviously, it’s not in publisher’s’ interest to purposefully serve redirects. Let’s take a deeper look and see if we can safely cross them off the list.

Over the last couple of years, and starting heavily in 2014, major websites have been struck with this problem: sites like NBC, Ebay, NHL, Slate, New York Post, and countless others.  Initially, some thought that maybe the publishers were striking deals with the trendy puzzle game companies, and the deals might go something like this: the publisher adds code to their site that prompts the redirects to the specific game, and then the publisher gets a cut of the profits from game downloads. Sounds somewhat reasonable, right?

Well, there are some major problems with this theory. Firstly (and as a publisher, you know this as well as any), purposefully derailing traffic that was gained through so much hard work doesn’t make sense. Owning a website and publishing quality content takes more time, grit, and resolve than most people realize, and a reader base doesn’t just show up overnight (well, unless a post goes viral). So cutting a deal with game companies for a chance at a temporary bit of money would not be a wise choice.

To add on top of this are the anecdotes of thousands of website owners! If you’re a publisher and you’re reading this now, you’re likely thinking “I would never work with a company serving redirects!” And you’re not alone.

On the other hand, game companies themselves deny responsibility, because they state that their contracts are at stake. For example, King Digital Entertainment is one of the largest social games companies in the world (they own Candy Crush for crying out loud). When asked about redirects, they replied “King’s contracts with suppliers explicitly state that this practice is not allowed when working with the company, and it will terminate contracts and no longer work with any suppliers found in breach of contract by creating these redirects. Any details given to help track down guilty parties are appreciated.”

Appsfire CEO Ouriel Ohayon has said, “Game makers like King and Supercell may not even be aware because they buy so much media across multiple networks and affiliation platforms.” How could the game company not even be aware? Well, if a company wants their product advertised, they may go to Advertiser A to generate a certain number of clicks. Advertiser A might go to Advertiser B since they might be better at a specific type of ad, and Advertiser B might employ some redirection tactics without the knowledge of either Advertiser A or especially the game company themselves. This creates a complicated web of advertising that is difficult to get to the bottom of.

Here at Monumetric, we partner with the largest ad providers, buyers, and exchanges in the world. So why are these providers allowing these ads?

They’re not! They have advanced blocks and filters in place to keep any type of adware (malware served through ads) out of millions and millions of ads they traffic on a daily basis. For example, Google, one of the most technologically advanced companies in the world, are having their systems tricked by these redirects. This is because redirection adware is specifically written and designed to do two things other than taking over a visitor’s site experience: 1) Get past filters, and 2) be difficult to track down and pinpoint. Providers are incentivized to help us track these redirect campaigns down, and we are in constant communication with them to do that. Just like our company, ad providers don’t receive any benefit from providing ads that redirect the user, because it negatively affects the performance of a site and number of ads served, which is how we make money.

Redirects can happen on any device and any browser, but the majority of them come through iPhones and Safari.

Apple is aware of the problem, but up until this point, they have declined to comment publicly on the issue. Many in the industry think a large portion of the responsibility lays at Apple’s feet. When Apple released iOS 8 in September 2014, they said “Safari now blocks ads from automatically redirecting to the App Store without user interaction. If you still see the previous behavior… please file a bug.” They obviously recognize that this is an issue for many iPhone users, but haven’t found a solution as of yet, although they have tried.

Google is also aware of the problem, and they have designed safeguards to circumvent the redirection. From our experience, this has been immensely helpful, as most reports we get are with iPhone users.

So, to summarize here is a list of those who are negatively impacted by unwanted redirection:

-Companies that visitors are redirected to (sure, they get clicks, but these erode the public’s trust in them and also breach their contracts)

And here is a list of those who are positively impacted by unwanted redirection:

So what can you do to help? Another great question!

Since ad providers work with thousands of advertisers, and due to the sheer volume of ads being called for and served (over 100 billion every day), knowing which advertiser served a certain ad is not a simple task. However, there are some key bits of information that will help us and our ad providers track down the offending campaign.

Here is the data we need to help narrow the search while combing through the vast amounts of information. 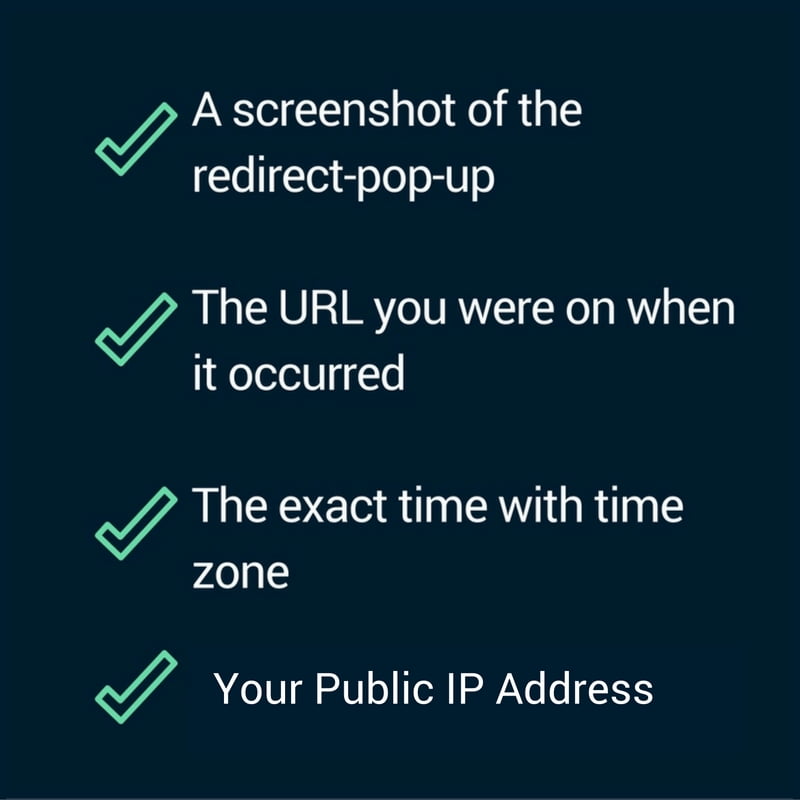 *you can find your IP address at http://www.whatsmyip.org

And lastly, here are some things you can instruct your readers to do to help make a difference: 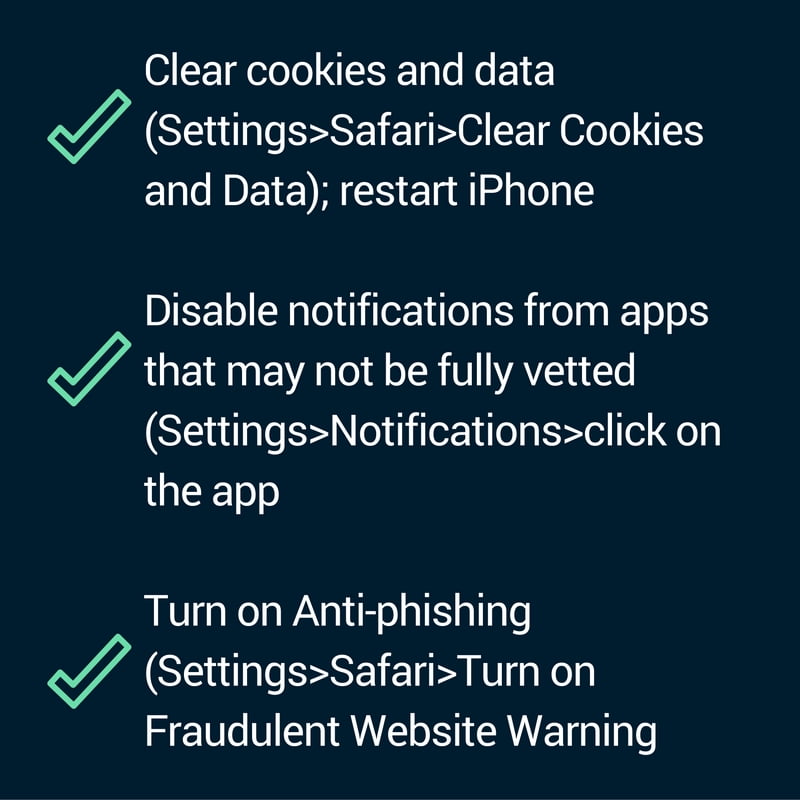 We are on your side here.

We do everything that we can to help keep these off of your site, and we understand your frustration when they do show up. Dealing with redirects is a problem that everybody in the online advertising industry faces from time to time. Seasonality is also a factor to consider. Ad demand generally decreases at the beginning of months and quarters, and it’s cheaper for advertisers to run these schemes profitably during these periods. Following the data and systematically researching the potential offending campaigns is the best way to combat this, which is why if we work together, we can get the campaigns blocked quickly and efficiently.