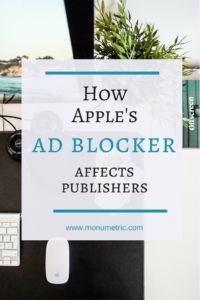 On September 16, 2015, Apple released mobile iOS 9 and on September 30th Apple will release the desktop OS X El Capitan. As part of these releases, Safari will have the ability to install ad blocking apps that prevent ads from showing. As a result, publishers, especially those with a lot of traffic from Safari, could potentially lose revenue from these changes.

According to TechCrunch, “Following the release, the Apple App Store will distribute applications that allow iPhone and iPad owners to install apps offering extensions for Apple’s Safari web browser that will prevent the browser from loading not just online ads and pop-ups, but also other content that slows down browsing and consumes resources. This includes tracking scripts, cookies, images, auto-play videos and more.”

The iOS 9 release is for all Apple mobile devices available now and goes back to iPhone 4S, 5th generation iPod touch, iPad 2, and the iPad mini.

The good news is the default is OFF, and most of our network has an audience that is less likely to find and install an adblocker.

While you should be informed, know the ad industry isn’t going to implode and that it’s unlikely your readers are the type who will use ad blockers. We asked Braden Allen, who manages programmatic ads for The Blogger Network to elaborate. He said, “Ad blockers have existed for years, yet only 16% of the US internet user have installed them. The real question is how many Safari users are going to go out and install ad blockers now that they have the ability to.

He went on to explain, “the iOS 9 update increases the amount of people who could install ad blockers but does not guarantee that they will. Lifestyle blog readers fall in a demographic that is less likely to download ad blockers. While some will adopt this new option, there probably are not enough to warrant a panic.”

According to Apple, the move is to speed up iPhones’ operating systems and extend battery life. However, Androids and other brands that don’t use ad blockers have as long or longer battery life and are just as fast.

One thing to note Braden says, is that iOS impressions right now are not as valuable to media buyers as impressions from other networks are. That means you’re earning less for your iOS users then you are for you Android users. “The amount of user data that advertisers get from iOS users is limited to first party cookies. This means it’s harder for advertisers to track and predict who your viewers are. Advertisers will pay more for users with more meta data and limiting this to only first party cookies, devalues iOS impressions.”

What Can Publishers Do?

As more information comes out, our advice may change. This is still very new, and the industry is figuring out how to respond. Here are some strategies you can consider. First, how much of your traffic comes from Safari? Look at your analytics to get an idea of how much you could be impacted.

You may want to educate your readers. Let them know that blogging supports your family and that ads are how you support your business. Ask them not to use ad blockers and if they do, request that they make sure your domain is not blocked. You might even request they use a browser other than Safari to view your site.

Next, do your best to make sure there is a good balance of content and ads on your site. Having the wrong balance can motivate readers to block ads from your site.

Stay tuned for more news from us on this topic. Have you heard from your readers or seen any impact from ad blocking? We’d love to hear your thoughts.